Five reasons why now is the time to build 'unsexy' startups

Investor sentiment is low. Funding is slowing down. Valuation multiples are shrinking. Is it now is the time to build 'unsexy' startups?

Investor sentiment is low. Funding is slowing down. Valuation multiples are shrinking and my WhatsApp does not get filled up with random mates bragging about their paper multiples on individual stocks. Investing in tech does not seem so 'sexy' anymore.

Financial indicators, such as the general direction of public markets, tell us that the current environment is a bearish market.

Yet this is, perhaps, precisely why now is the time to build 'unsexy' startups.

In both public and private equity markets we have effectively seen a 20-year-long bull market unfold, which was briefly hit mid-term by the real estate bubble crash. Over these 20 years, flashy digital platforms proliferated, from social media to fintechs and from mobility and delivery apps to thousands of copycats B2B software companies.

At first, it was a game for bold digital investor pioneers like Marc Andreessen and Peter Thiel that were bucking the gloomy trend post-dot-com crash ─ and made their names in the world of VC with those early bets. However, by 2021, the cycle reached mania stage and investors from all walks of life wanted to back digital platforms and 'low-tech SaaS'.

Public markets were just as hyped with SPACs and IPOs popping up all the time.

Now, after three full quarters into 2022, markets have cooled down significantly. We don't know for sure how long it will last, but the market is definitely experiencing a downturn.

On the flip side, cycles are just that: a period, a season. And a bear season does not necessarily mean businesses can't be started. Nor that businesses won't be funded.

They do mean a shift in the market perspective, but this can be a positive change for founders focused on building hard, complex businesses with strong fundamentals, or in industries that saw less valuation hype in the last few years.

There are at least five reasons why founders of unsexy startups could actually find it easier to build their companies now.

1. Capital is still there

The tremendous amounts of capital that was raised during the bull cycle must be deployed over the next few years.\ In the US alone, the National Venture Capital Association (NVCA) measured dry powder to be as much as $290bn, as of June 2022. Some estimates believe the global VC industry to be sitting on cash commitments of $500bn or more.

When a VC firm raises money, it generally commits its capital to investments over a three to five-year investment period. So, unless a major financial meltdown collapses the economy of their limited partners (investors in VC firms), making them default on their commitments, capital that's been raised must eventually find its way into deals.

Sure, what we saw during Covid pandemic, such as VCs emerging from the woodwork and funds being raised and deployed in 18 months, was abnormal and we are seeing a slowdown that's unluckily to revert back to the recent pace.

However, funds make money both by generating returns and by managing the actual money. The first is how they actually make real money. The latter is what gives them cashflow for their operations. If they don't invest at all, they will need to return the capital, which will kill their bottom line. So if good deals come around at the right valuation, VCs won't hesitate to deploy and demonstrate they are still relevant to their own investors.

Due Diligence is back and closing rounds is taking longer. This actually benefits companies with their heads down building real businesses, rather than flashy 'hot round' celebrity startups.

Many investors and entrepreneurs become very rich during bull cycles, where certain types of founders and their early backers can kickstart a game of FOMO. It's a game that goes all the way up the food chain, from high-net-worth writing angel cheques just because they can, to VC funds riding the hype wave. From private equity and hedge funds wanting a piece of the cake at growth stage, to retail investors buying up stocks when companies go public.

Covid, rather than slowing the party, cranked up the volume. Investment decisions made over a single zoom call, fast rounds closed with no real rights for any investors, SAFE notes sent and signed in a week, seed rounds ballooning to tens of millions and lack of referencing -- all this became the norm rather than an exception.

At the peak of their frenzy, bull markets become very noisy. Business valuation turns into a hot potato game in which a company's ability to raise capital is largely separated from business fundamentals.

As markets cool down, businesses that can either point to real underlying technology innovation or simply more solid business fundamentals -- the unsexy startups -- will finally find they are given their deserved air time.

3. Crashing down has its costs

Over 20 European 'VC darlings' from the covid era have been slashing their workforce in 2022. This is not counting companies that literally shut down (I helped one team connect with a few portfolio companies of mine, for example) and even corporate VC operations being downsized. In the US, over 40,000 workers lost their jobs in scaleups as of September. This means that for once, the tech market is full of people that are looking for new job opportunities and most hypergrowth-type scaleups are not there to compete for talent.

Even publicly listed Big Tech is not immune to market conditions, creating a unique opportunity for early-stage startups with a low, yet sensible budget, to have higher chances to secure great tech talent.

4. Lower valuations no longer a curse

Lower valuation multiples now have their pros for startups. Many complex and harder-to-build startups have had far lower valuation watermarks than vanilla SaaS businesses. A few examples can be product companies, hardware startups and also those companies with higher margins, but in historically unsexy areas for generalist VCs like logistics, defence, and even certain less explored areas of gaming and creators' economies.

Now that the digital wave has come crashing down and that VCs have more time for due diligence (and more interest in actual underlying metrics), businesses that have genuinely deep tech IP or that are able to showcase an easier path to profitability, have become prime investor targets in the current environment.

Whilst it is early days to have definite data to confirm the above, which I mostly infer from the ongoing launch of specialist funds in these sectors and the feeling I get from investors I meet remotely and in London, funded startups indeed look a bit different than last year.

5. Specialists in deep tech are launching at all stages

At the end of 2019 I was just about to start my career as an angel. I was then invited to attend the first edition of Allocate.gp, a non-profit event for emerging VC managers. There, I met only one fully-dedicated deep tech investor. And even they would not really cover hardware.

Europe has historically been playing catch up on tech with the US and has been lagging behind even more specifically in deep tech innovation and deep tech funding. 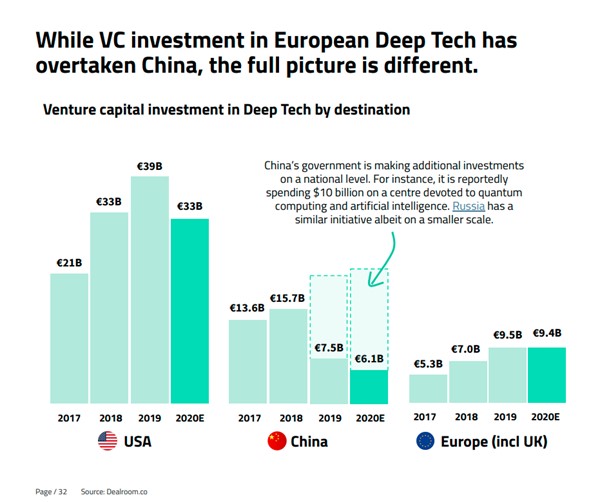 The data confirmed my gut feeling from running the Silicon Roundabout tech meetup community, that hardware and deep tech were overlooked areas in the VC world. Especially at seed and then later at the late growth stage.

However, the trend is changing and more and more investment is going into deep tech and overlooked sectors and founders.

Anecdotally, in September 2022 I returned from an Allocate.gp retreat for fund managers, this time as the general partner of my own deep tech fund, and out of 40 VC managers, eight covered deep tech and an additional five covered non-deep tech overlooked founders and industries.

In general, the trend across the whole private market space (both in private equity and venture capital) is that new funds tend to be specialists, rather than generalists. This is because the underlying investors in funds are recognising that it's becoming hard for VCs to do well across all of the technology sectors and stages. So they prefer to build baskets of thematic funds they believe to be master in specific geographies, sectors and stages, when it comes to starting new relationships with new VC firms.

This trend is bringing more attention to sectors and types of businesses that have historically been overlooked.

Complex and unsexy is the new sexy

So in short: the unsexy and hard stuff is set to become the new sexy in the startup world. And even for non-deep tech startups, those with real harder-to-build businesses will have an easier time fighting the noise of celebrity 'hot' rounds.

The same market sentiment that's slowing down fundraises and shrinking some unicorns' valuations may just be what other founders needed to get more space to prove themselves with numbers and facts. If you factor in that the biggest hirers for the last decade are now firing people, you also have a much more startup-friendly talent market.

Investors have become more willing to dig into Excel spreadsheets to understand complex business models. To do reference calls with customers and IP experts and explore new markets that can solve huge global problems. With less noise comes more focus.

There is, therefore, no better time than now to build unsexy, complex startups that are hard to do. Because, for once, capital is still there and, whilst it's harder to get it overall, the fall is mostly being felt by those software companies who 'ate the world' for 20 years and shot up during covid. The rest can now take their fair shot.